Both in the laboratory and in the field DE-BUG Clean Fuel Units have been proven for over 20 years.

Our product provides many companies with a competitive advantage over rival companies, that advantage is maintained through privacy.For this reason some companies which use our DE-BUG technology do not wish their details published. From fishing fleets to militaries to mining companies to oil companies to trucking fleets, every testimonial and test is hard earned and represents a small proportion of the hundred thousand plus units that have been successfully sold worldwide. Nato Part Numbers Available.

Proof of bacteria elimination comes from these highly respected sources: 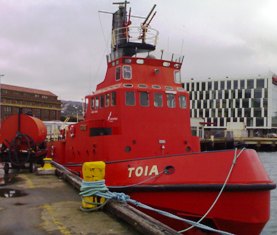 In a 6 month independent test the Dutch Fishing industry Research Institute found dramatic reduction in contamination and that DE-BUG units were clearly a solution to contamination problems.

* Contamination disappeared and did not reoccur

The Go-22 Fishing trawler (pictured) took part in the testing.
As a result of this test the Dutch fishing fleet and Rhine barges were fitted with DE-BUG units and the Dutch Coast Guard operating policy is that all their boats must have DE-BUG units fitted before leaving dock.

ICI New Zealand Ltd Bio-deterioration Service tested diesel fuel samples from the fuel tank and water trap of an operating truck before and after fitting a DE-BUG.

High contamination counts were found in the water trap before DE-BUG was fitted. It was determined that, regardless of the tank contamination, the De-Bug unit will successfully clean up the fuel system.

* the system cleaned up over the test period of 21 days

“By merely fitting a L1000 DE-BUG unit & running the system as per normal operations, the system returns to normal in a couple of days.”

Wellington Fire Brigade had a complete engine failure of a Dennis fire truck on a call out to an emergency. Upon further inspection it was confirmed that the appliance had microbial contamination “diesel bug.”

“There have been no more signs of “bug” growth in this fire appliance, or any other fire appliance we have fitted a DE-BUG to.” “We have no hesitation in fitting more of these DE-BUG fuel treatment units to fire appliances”

The Condor 10 had a major diesel bug infestation and after intially dosing their fuel tanks with expensive bio-cide they decided to install DE-BUG units. 1 on each of the four v-16 ruston engines.

Due to DE-BUG becoming known as “the standard in preventative maintenance” Mana Coast Guard installed DE-BUG Clean Fuel units on its vessels.

Union Rotorua, a merchant vessel operated by Union Shipping of New Zealand, was supplied with over 1000 Tonnes of light marine diesel bunker oil which was subsequently found to be contaminated with Hormoconis Resinae. The bacteria caused severe problems with blocked fuel filters; filter life was reduced from 6-8 weeks to 17 hours.

On fitting two De-Bug L4000 units, the fuel filter life was extended such that frequent and expensive filter changes were no longer required. The two units successfully coped with fuel flow rates of 78 tonnes of fuel every 24 hours. While cleaning of the infected bunkers was still required, the fitting of the De-Bug units allowed this to be scheduled for a convenient time, allowing the vessel to continue a normal trading pattern and generating revenue for it owners. No further problems were reported during the its last few years of service.

The Union Rotorua was a formidable ship and was called upon to generate 10 Megawatts of emergency power for Auckland Central Business District when a power cut threatened to cripple the city.

National Institute of Weather & Atmospheric Research Vessels are used for oceanographic, fisheries and coastal research as well as for marine engineering and environmental studies.
After refuelling with suspected contaminated diesel fuel from Chili, the Kaharoa’s filters were not lasting normal service life and the adding of bio-cides was proving expensive. Since the installation of the DE-BUG unit the adding of expensive Bio-cides not been necessary and filter life has returned to normal.

Remote Power Stations in the Darwin area of Australia are supplied by coastal barges which in many cases cause the infestation of the diesel fuel used. The Power and Water Authority of the Northern Territory fitted De-Bug units to the fuel systems and recorded increases in fuel filter life from 168 hours to 500 hours. Further trials demonstrated that filter life could be increased well beyond 500 hours.

The largest DE-BUG ever made was for the “Cossack Pioneer: a floating oil production facility.
The L50,000 was specified to DE-BUG fuels of up to 50,000 litres perhour flow & had to receive special approval from the American Bureau of Shipping Approval (ABS)

“I am convinced of how genuinely good they are, we have found, even if there wasn’t any sign of diesel bug, the tugs are all running better, power is up a bit, fuel filter life is better than normal, engines run smoother and fuel burn is good”

Deep Submergence Rescue Vehicle Support Ship (DSESS) Kellie Chouest, leased to the US Navy for research, rescue and retrieval, suffered severe algae contamination and the fuel filters required replacement every few hours. Installation of De-Bug units in the fuel supply lines solved the problem and allowed filter replacement to be undertaken at the normal servicing intervals.

Shell Deepwater USA installed a L4000 DE-BUG unit on the Auger (an off shore diesel storage platform in the Mexican Gulf) The Debug unit reduced filter usage cost from $8,000 to less than $1,000 a year. Similar units were scheduled for Day tanks on the emergency generator and backup Fire Water pumps. 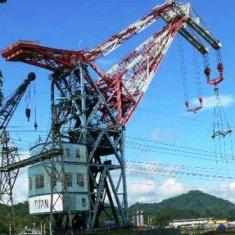 The Titan was once known as the largest floating crane in the world.
The TITAN was built by Hitlers Germany, but claimed by the USA after WW2.
It served at Long Beach California for many years before being sold to Panama in 1999 for $1=.
The crane had caused problems in Long Beach, California and had to be removed. When the crane was relocated to Panama Canal they installed a DE-BUG unit. The thick black smoke which had dogged the TITAN was substantially reduced.

A Korean Fishing fleet tested performance of identical fishing boats fishing the same waters, one with DE-BUG clean Diesel units installed and one without. They found that:

* lower exhaust temperature on the auxiliary engines 1 and 2 & enabled load handling without starting the A/E 3.

The Koreans concluded that:

* the fuel system controlled bacteria in the fuel, moisture separation

* wear and tear on injector nozzles was reduced

Malaysia Towage and Transport Sdn. Bhd tested fuel consumption on two vessels, Badang Empat and Badang Enam on a before an after basis. They found that:

Norna, a Scottish Fisheries Protection Vessel, experienced microbial spoilage in the diesel fuel header tank, and during bad weather, a build up of a sludge type biomass in the fuel feed line to the purifier halving its capacity from 1 tonne per hour to 0.5 tonnes per hour. In addition, the fuel strainers on the feed lines to the twin 3,000 HP engines had to be cleaned every ten days to prevent fuel starvation.
After fitting of an L4000 De-Bug unit, restrictions were eliminated and the cleaning cycle for the engine strainers was increased to ten weeks; a sevenfold increase in life.

Inconnu, a 60ft fishing vessel used for crab and lobster fishing off the Channel Islands experienced fuel starvation due to filter blockage. The problem became so severe that the filters were being replaced every day. Treating the fuel with Biocide only increased filter life to two days! Upon fitting a De-Bug unit, the contamination problem was eradicated and filter life increased to 40 days. The owner also dispensed with using expensive chemicals.

A L4000 De-Bug unit was fitted which resulted in a reduction of the engine exhaust temperature to within limits. In addition, daily fuel oil consumption (for the same shaft revolutions) was reduced from 17.4 metric tonnes to 15.5 metric tonnes; a reduction of over 10%.

The Port of Singapore undertook a trial in one of its vessels and fitted a L1000 De-Bug unit on one of the vessels engines. After fitting, the number of filter changes reduced by 40% compared with the other engine. The other engine was subsequently fitted with a De-Bug unit.

The Singapore Naval Maintenance Base also undertook a trial on three vessels involving the monitoring of fuel consumption (usage per hour). Two vessels which were known to have higher than normal fuel consumption recorded savings of 20% and the third a saving of 15%.