The Effects of Microbial Contamination

The physical effects of microbiological contamination (diesel bug) are the formation of sludges, biofilms (slimes) and surface or interfacial scums. These occur in the fuel tank and manifest themselves as material which block filters. 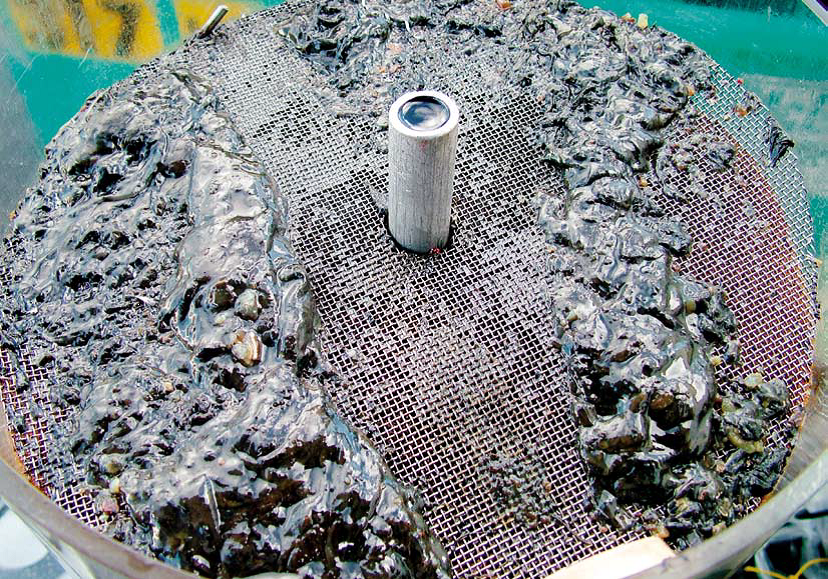 This is a closeup photo of “live diesel bug” taken from a fuel tank.

Fuel that is infected with bacteria is not reliable and there are many and varied consequences of using contaminated fuel.

Ultimately, performance suffers and fuel consumption and maintenance costs increase, but perhaps the most critical concern is the real potential for blockages in the fuel system which cause engine failure while underway – with potentially devastating consequences.

Marine Vessel “Lady Kawhia” Fuel filters and fuel lines were blocked by a black tar like substance which caused a complete starvation of fuel to the engine. See the Martime Safety Authority Accident report.-PDF
Both the fuel Lines and also the filters were completely blocked. You can see how this is possible when viewing the above picture of live diesel bug.

The most common response from a diesel engine owner or a fleet manager is “I do not have a diesel bug problem.’
What clogs fuel filters? What causes fuel pumps to prematurely malfunction? What is the residue left on injectors? A problem to some has to be major repairs or a total engine starvation leading to a shutdown. Given time this may well happen. But by then it is far too late! Preventative maintenance is the key, every diesel appliance should have a DE-BUG installed.

Others in the know are aware that once diesel has left the refinery it becomes contaminated by water, condensation, the fuel tanks themselves, or even the air. Almost all diesel has some microbial contamination; by addressing the ongoing issues pre-emptively, the DE-BUG owner can also receive positive side effects.

Growth in Fuels and Oils

Microbial contamination (Diesel Bug) of petroleum products is a well documented and serious problem facing the petroleum industry. Where ever diesel is used or stored, bacteria, moulds and yeasts are able to degrade the hydrocarbons in the diesel and yet more are able to feed on the intermediate by-products of the degradation.

How about this closer to home example of Jet fuel in New Zealand 2004. CAA Govt website report.

“In February 2004, the CAA received notification that some aircraft were experiencing fuel filter bypass indications on medium-large transport aircraft using Jet A1 fuel. Subsequent inspections found that the filters contained a black sludge/film. Inspection of other aircraft found similar results to varying degrees.” “Analysis of the fuel tank samples indicated that the microbiological (fungi and bacteria) contamination was very slight. One sample showed a ‘very heavy’ concentration of yeast.”

This is live diesel bug adherring to the fuel tank.

Emergency generators are something we all rely on.

See our dedicated web page on how to kill diesel bug in emergency generator tanks.

For our civil defence, hospitals, prisons, datacentres and other buildings with critical loads. These all rely on our emergency generators working at 100% when we need them to. However these are the very engines most at risk. The diesel is stored for lengthy periods in less than ideal conditions. Every diesel generator should have a De-Bug Installed as part of their Health and Safety program.

There are many different types of organisms that make up what we refer to as diesel “bugs”. Generally, there are aerobic types; requiring oxygen for metabolism, and anaerobic types that don’t. The aerobic types are responsible for the algae and slimy mats, while the anaerobic bacteria, known as SRB’s (sulfur reducing bacteria) produce hydrogen sulfide as a by-product of their metabolism. Combined with moisture, strong sulfurous acids are formed, which are corrosive to metals. Evidence of this type of bacteria is usually seen a black grit resembling coffee grinds. The following are some telltale symptoms of microbial contamination:

Slimy material – in filters, tanks, and other fuel system components

Corrosion – to fuel system components due to acids produced

The diesel fuel itself, since it is degraded, also shows symptoms:

Color – fuel is darker, and can be more opaque

Odor – a rotten egg smell due to hydrogen sulfides

A number of microbial and chemical processes produce corrosive by-products including strong organic acids and sulphides. These can degrade protective coatings such as paints, rubber, some plastics and metal oxide films as well as destroy or inactivate chemical corrosion inhibitors and cause hydrogen embrittlement of metals. Black deposits on copper or copper containing alloys in pipe work and bearings as well as pitting are evidence of microbial induced corrosion.

Engines rely on high quality fuel that has been properly filtered and separated (from water), with no flow restrictions, to achieve proper atomisation, combustion, engine performance and fuel efficiency.

Biocides are frequently used to treat severe contamination, however many of them are hazardous chemicals and require careful handling. Although some are marketed as being “environmentally friendly”, many are harmful to the environment and waste disposal contractors may need to be called in if waste containing dead microbes and biocide are to be removed.

Adding biocides to the fuel system can actually cause more problems. The fallout of dead cells collecting on the bottom of the tank forms a sludge material that can still find its way into the fuel system, clogging fuel lines and filters, potentially leading to performance problems and possibly engine damage. This can be especially true in rough weather when the contents of the tank are effectively shaken into suspension.

Furthermore, over time biocides lose their effectiveness as microbes build up immunity to the chemicals. Occasional dosing can actually accelerate this action and some owners have reported bio-mass growth in systems despite regular treatments with biocides.

Thus biocides can actually contribute to the problems of microbial contamination; not only by causing a large amount of sludge to build up but by also giving a crew a false sense of security.

Diesel fuel is an organic compound made up of hydrogen and carbon, and is actually a good food source for these microscopic organisms. Within a fuel tank, there is water for germination, carbon for food, dissolved oxygen and sulfur for respiration, and trace elements for growth. Ideal for Life…

Tests & Testimonials
How to Purchase