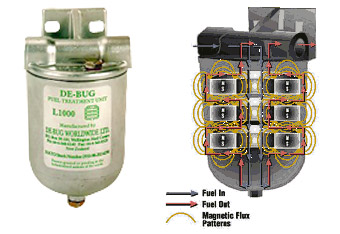 It takes more than a magnet to make a Patented DE-BUG. Only genuine De-Bug units have the exclusive TRI-MAGTM and MULTI-MAGTM Bug Killer Packs.

Lindsay Forrest is hailed as being one of the inventors of the DE-BUG decontaminator. Although they intially developed a singlew magnet system, they concluded that this was only partially effective and they continued on to create the best possible unit.
While designing the DE-BUG unit Lindsay became aware that a single magnet device could not produce the desired oscillating magnetic field. Microorganism cells could not react quickly enough to a rapidly changing magnetic field. 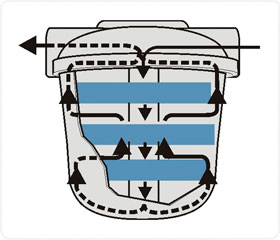 An oscillating magnetic flux field effect could be simulated by carefully directing contaminated fuel flow through a stack of multiple permanent magnets. By directing microorganisms into and out of the flux field, as the photo shows, a simulated oscillating field was achieved. Shortly after, the De-BugTM Model L-1000 Fuel Decontamination Unit was launched which fully incorporated this concept. The success of this unit is based on a specific flow rate through a stack of magnets known as the “TRI-MAG Bug Killer PakTM“, which achieves a microorganism kill rate efficiency of nearly 100% in one pass. These permanent magnets have a service life of 20-50+ years.

Housed within the De-Bug Fuel Decontamination Unit, the “TRI-MAGTM Pack consists of three flat donut shaped permanent magnets, manufactured from ferrite-metal and ceramic-coated, stacked each above the other. The spacing between the magnets is scientifically determined in order to produce the optimum flux field density. The magnets are arranged and held in place with special spacers in such a way that a north pole always faces a south pole. These spacers are manufactured from Acetyl M90 plastic. As with all other special engineering materials used in the De-Bug, this material is used for its resistance to diesel fuel and similar hydrocarbon based products. In addition, Acetyl M90 plastic is used for its adaptability to cope with various applications such as the harsh marine environment, the mining industry, and agricultural equipment. Acetyl M90 Plastic is also particularly resistant to environmental stress cracking and numerous chemicals usually associated with diesel fuels.
Within the De-Bug unit, the spacers perform two functions. First, to create and maintain proper distance between the magnets. Second, to direct fuel flow through the magnetic flux field. As the fuel passes through the De-Bug, any microorganisms are subject to a rapid magnetic field change four separate times or four oscillations. This unique patented design (US patents 5,248,437 and 5,055,188, New Zealand patent 231876), exclusive to De-Bug products, is what enables De-Bug Products to achieve their unparalleled effectiveness and success. De-Bug holds exclusively, the patent for all multiple magnet device designs, which are incorporated in every De-Bug Product. If it does not have a TRI-MAGTM or MULTI-MAGTM Pack, then it is not a DE-BUGTM.

Magnets are polarized charged particles that radiate magnetic flux. Flux lines always start at the North Pole and seek a South Pole that is normally at the other end of the magnet. The flux lines radiate out in an elliptical manner.

The unique make-up of the magnetic field in the De-Bug fuel treatment unit is made possible by stacking three annular shaped permanent magnets on top of each other to form the patented “Tri-Mag” stack. A number of Tri-Mag stacks placed in line make up the patented “Multi-Mag” stack that is used to provide more powerful units.

The magnets are stacked to ensure that the North Pole of one magnet always faces the South Pole of the adjacent magnet. This results in the magnets attracting at all times and therefore maximises the flux density, and the resulting destructive effect on microbial cells, in the spaces through which the fuel and microbes flow.
When the fuel and microbes flow between the magnets and through the centre of the middle magnet in the Tri-Mag™ pack, the flow path causes the microbial cells to experience the maximum levels of magnetic flux density from several different angles, and 24 changes in polarity of the magnetic field.
This overwhelming attack from all directions, combined with the oscillating field strength can eliminate microbial contamination when used in a fuel system where fuel is re-circulated through the De-Bug unit either on a periodic or continuous basis.

De-Bug Units are static magnetic inline device that create an optimum magnetic flux field directly responsible for destruction of the cell membrane. Exposing the microbes to a strong, changing magnetic field will ensure maximum destruction of the cells. The debris stays randomly suspended in the fuel and due to their sub-micron size easily pass through engine components and burn up with the fuel.

Other systems use a single magnet and claim similar success. What makes your product using a three magnet stack different?

De-Bug Units are One of a Kind. The inventors (in knowing how good this system is) patented the DE-BUG system worldwide. Single magnet systems are sub-par of the DE-BUG System.

In the development stage the inventors of De-Bug Units used single magnets Units and found them to be partially effective. That could be Ok, as there was nothing better on offer in the market, however after further testing using different combinations of magnets, gauss strengths and configurations they concluded the triple & multi magnet systems were substantially better for eliminating microbial contamination than a single magnet.

DE-BUG have sold in excess of 100,000 units throughout the world and the proof being they are authentically endorsed by significant number of end users that have had a persistent bug problem, by fitting a De-Bug Unit; the bug problem has been solved permanently!